Now I remember why I hate running contests. They’re a pain in the butt to judge.

Anyway, this last Weekend Caption Contest generated a ton of entries, with some actually managing to avoid out-and-out blasphemy. Judging the winners was tough, but that’s what I signed on for. (Well, no, it isn’t, but never mind.)

First Place goes to Sue Dohnim, who nearly got me fired when I read her “The “Runaway Pope,” seen here being escorted back to the Vatican, tried to avoid an outdoor Mass by claiming he was kidnapped by a Hispanic couple and driven to New Mexico.” at work. Note to self: do NOT do that again.

Second Place goes to Freakyboy, for his Paul-baiting “Damn you, Intelligent Designer!”

Third Place is claimed by Jeff Blogworthy, for his profoundly existential “The Pope attempts a visual demonstration of the futility of a blind and purposeless universe guided by chance and necessity.”

Bonus awards in the extended section.

There was a real brawl for the “Best Michael Jackson reference,” with Cowardly Anon, Wally, and Moon Monkey breaking new ground in tastelessness. In the end, though, Moon Monkey clinched it with “FOX NEWS:”Well I thought I’d never live to see this,but here we are in the year 2026 and ‘Blanket’ Jackson was seen on the streets of Rome. Chip off the old block,eh’ Bill?”

Another source of inspiration was old television shows and commercials, with bullwinkle, Guido, SCSIWuzzy, spacemonkey, Sue Dohnim, Slublog, and McGehee all tapped into the zeitgeist for their entries. In the end, though, bullwinkle “Pope Benedict made a mental note to himself to never, ever offer his Coke to a sumo wrestler after a match again.” bagged the prize for “Baby Boomer Allusion Of The Week.” Mean Joe Greene will be presenting the prize personally.

The “Missed It By That Much” is divided between Todd, for “I AM NOT AN ANIMAL!!!! I AM A MAN!!!!,” and Moon Monkey, for “Looks like another clothing malfunction…!” Either coulda been a winner outright, but the proper quotes are “I am a human being!” and “wardrobe malfunction.” Yeah, I’m real nit-picky, but it’s MY contest this week and MY rules.

The “Gratuitous Hitchhiker’s Guide To The Galaxy Reference” goes to Sue Dohnim, for “SUNDAY SUNDAY SUNDAY! The Pope versus the Bugblatter Beast of Traal! BE THERE!” It comes with this lovely towel.

And finally, the coveted “Laurence Simon Sick And Twisted Bastard Award” goes to Tim Worstall, for “Sister, throwing me your petticoat is not an appropriate response to my asking if you want Eggs Benedict for breakfast.” Tim just barely beat out Laurence Simon’s “Inspired by Arafat’s Israel-shaped kaffiyeh, Benedict begins his own fashion campaign to liberate East Germany from brutal West German occupiers.”

Thanks to everyone for playing, and Friday a brand-new Caption Contest&trade will be up! 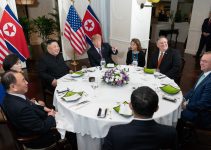