Yesterday we covered the story of Air America Radio receiving nearly half a million dollars in “loans” from a Bronx boy & girls club that Air America owners don’t seem to remember anymore. Based on published reports from June, 2004 it appears that the current owners (and original investors) of the liberal talk network deliberately reorganized the company to avoid having the repay any and all liabilities – including those loans.

According to a June 19, 2004 article in the Chicago Tribune (locked in their pay archives – cached version here), the transfer of Air America Radio ownership to Piquant LLC was an inside job arranged by the co-founder of the network, multi-millionaire venture capitalist Sheldon Drobny.

The investors in Air America Radio, the liberal talk radio network that launched in March, are restructuring the company to free it of any obligations incurred by ousted chairman and founding investor Evan Cohen.

The investors, including Highland Park couple Sheldon and Anita Drobny and Air America Chief Executive Doug Kreeger, formed a new corporation, Piquant LLC. They plan to use the new entity to purchase the assets of Air America from Progress Media and RadioFree America, two related companies that own and operate the network.

“We have an asset purchase agreement we’ve entered into,” said Norman Wain, another investor. “Progress Media and RadioFree America are selling all of their assets to Piquant.”

…The purpose of the transaction is twofold: to eliminate Cohen and his partner Rex Sorensen’s shares in the company, and to insulate the cash-strapped network from any debt or other obligation that Cohen may have incurred.By his own admission Sheldon Drobny is the co-founder of Air America Radio (AAR), and the investors and owners of RadioFree America and Progress Media appear to be the same people who now own Piquant LLC (except for Cohen and Sorensen).

Remember this is what Drobny and Kreeger’s company said about the matter yesterday:

“PIQUANT had no involvement whatsoever with funds from GLORIA WISE BOYS &GIRLS CLUB. PIQUANT neither received nor expended any of the sums that are the subject of the City’s investigation of the CLUB.

While that may be technically true, RadioFree America and Progress Media were involved with the funds and the current individuals who make up Piquant LLC (according to the Chicago Tribune) were owners or investors in those companies. They designed an asset sale and shutdown of the two companies specifically to distance the network from the liabilities of RadioFree America and Progress Media, including loans from the Gloria Wise Boy’s & Girls Club.

I’ll leave it to securities investigators and lawyers to figure out what kind of legal trouble the Drobny’s and Kreeger might be in (if any), but I would imagine the fact that they were significant players in all three companies will earn them careful scrutiny from New York DOI investigators, and possibly federal authorities.

Exactly how long will the mainstream media ignore this story? They love to eat their own – what are they waiting for?

Update: As noted in the comments, law professor Stephen Bainbridge looked at this transaction last year. His assessment is worth reading.

Update: Air America now claims they agreed to repay the loan (which they previously failed to even acknowledge) in this statement (partially quoted below).

As reported in the Wall Street Journal and the HBO Documentary, Left of the Dial‚ the company that the Gloria Wise Boys & Girls Club officials gave money to, Progress Media, has been defunct since May 2004. That company was run at the time by Evan Cohen who has not had any involvement in Air America Radio since May 2004.

The current owners of Air America Radio have no obligation to Progress Media’s business activities. We are very disturbed that Air America Radio’s good name could be associated with a reduction in services for young people, which is why we agreed months ago to fully compensate the Gloria Wise Boys & Girls Club as a result of this transaction.According to the Chicago Tribune report the current owners of Air America were the ones who closed Progress Media, so they most certainly had a moral obligation (and perhaps a legal obligation) to repay the Gloria Wise Boys & Girls Club. While I doubt that their agreement to “fully compensate” Gloria Wise occurred “months ago,” the fact that they did agree to repay the loans are a testament to the publicity blogs were able to bring to this story. 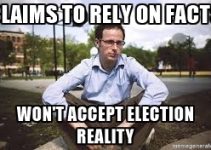