1) (Jeff) – “Two things in this photo have had big stiff white men in their ‘rotunda‘.“

2) (Kevin P. Craver) – “Like the lobbyists who owned the politicians at the party, Mary Carey paid good money for her boobs.“

6) (Dangerous Dan) – “Suddenly, getting screwed by the political system doesn’t seem all that bad.“

A tortuous use of language
Bonfire of the Vanities #103 - Reminder 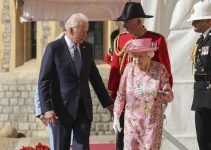