NEW YORK (AP) – Somewhere on a slab in Boston is a citizen of Red Sox Nation who actually gave his body to the cause.

With the team’s future increasingly dependent on Curt Schilling’s right leg, doctors decided to try an apparently unprecedented procedure to keep a tendon from slipping around in his ankle. But first, they wanted to test it out.

So they used a cadaver. No way to know if it was a Red Sox fan.

Schilling hurt the ankle near the end of the regular season and tried to pitch with the injury for Game 1 of the series against the New York Yankees. Unable to push off the mound with full force, he allowed six runs in three innings – his worst postseason performance since 1993.

“It seems extreme. We couldn’t find a case of it ever being done before,” GM Theo Epstein said. “It was the best way to allow him to have his normal mechanics.”Talk about taking one for the team, he actually took 3 (stitches) for the team…

Update: There’s been an Allah sighting! Alert the media. 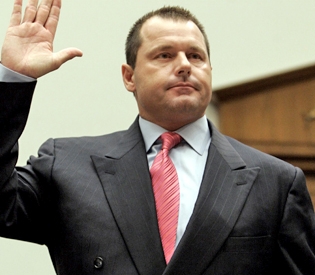