Home
War On Terror
"While not all Muslims are terrorists…"

…all the terrorists are Muslims.”

This has been a mantra in the public mind for some time now, and it’s always bothered me. I’m a nitpicker by nature; my first reaction to most any broad statement is to immediately find counterpoints to it. With just a little thinking, I managed to come up with four major terrorist actions of the last 20 years that were not Muslim-related.

1) The Unabomber case. While relatively small-scale, it’s longevity and seeming randomness kept it far more prominent than many single crimes that caused more deaths and injuries.

2) The Oklahoma City Federal Building. Althouth there are some right-wing whackos out there who claim Timothy McVeigh was tied to Islamic extremist elements (some even saying Saddam Hussein), so far there’s been little evidence that this was anything but home-brewed terrorism.

3) The Atlanta Olympics bombing: Eric Rudolph is a right-wing white supremacist religious whacko. In a nutshell, take whatever the Islamists are calling our forces in Iraq and apply it to him — it fits like a glove. And it speaks volumes about us that he’s currently in jail.

4) The Tokyo Subway Sarin Gas Attack: Aum Shinrikyo was a religious cult, but not Islamic.

So there are four examples of non-Muslim terrorists. Can anyone else think of more? And if you stacked all of them, one on top of another, I don’t think you’d equal the sheer horror that was the attack on the school in Beslan.

No, it’s not true that “while not all Muslims are terrorists, all of the terrorists are Muslims.” But if you hear about a terrorist incident and put money that it was committee by Muslims, you’ll be playing with hugely better odds than you’ll get at any Vegas casino. “The race is not to the swift, nor the battle to the strong,” but that’s the way to bet. 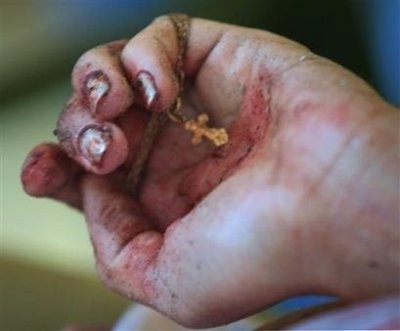