This weeks Weekend Caption Contest™ got a ton of excellent entries. Since entries tended to split between Billy Crystal movie and TV character references and straight captions I awarded winners in those two categories. The winning captions for this picture:

2) (Stephen Macklin) – “Hey listen, have you ever played a foreign leader?“

3) (Jess) – “You there — you always draw decent enough numbers when you host the Oscars. Ever thought about running for Vice President?“

1) (Aaron ) – “Miracle Max: Whoo-hoo-hoo, look who knows so much. It just so happens that your campaign here is only MOSTLY dead. There’s a big difference between mostly dead and all dead. Mostly dead is slightly alive. With all dead, well, with all dead there’s usually only one thing you can do.
Kerry: What’s that?
Miracle Max: Go through Teresa’s clothes and look for loose change.”

2) (Laurence) – “Have you ever been skiing and then run into… what are those guys?”
“Secret Service men.”
“Yeah, and you hit them and ow, it smarts.”
“I hate it when that happens.” 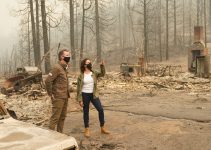